Skip to content
HomeActivism-for Peace
February 5th, 2021
BREAKING NEWS RELEASE: The ICC decides JURISDICTION over Palestine, Dr. Frank ROMANO intends to participate in trial against NETANYAHU, a war criminal.
Romano endeavors to add TRUMP, POMPEO & OBAMA to his complaint as accomplices to Netanyahu’s war crimes against Palestinians. Read his letter addressed to the public:
Dear Friends and Activists:
The ICC (International Criminal Court) has just ruled, in a major, landmark decision that it has jurisdiction over the Palestinian Occupied Territories (Including the West Bank and Gaza).
As such, Netanyahu, Gantz and other Israeli leaders/ potential war criminals can be arrested and held during their trials to further prevent the atrocities they have authorized and committed against the Palestinian people. Lieberman and others and other former leaders can also be arrested since they are implicated in those atrocities.
I am elated at hearing this news since I am one of the international lawyers who submitted briefs in support of the Palestinian people advocating that the ICC has jurisdiction and should proceed to condemn Israeli leaders, such as the above, and many others for war crimes and crimes against humanity.
Almost a year ago I also submitted a 65-page complaint (with an extensive legal analysis and much evidence) condemning the above for war crimes in violation of the 4th Geneva Convention, the ICC rules and other international laws.
In view of this excellent news, since the ICC has jurisdiction over the Israelo-Palestinian conflict, I need to urgently update and resubmit my complaint. I am also planning to add former presidents Trump & Obama and former secretary of state, Pompeo and other US leaders and former leaders for their actions as accomplices, facilitating Israeli atrocities against the Palestinian people.
Finally, if Biden continues US policies to give unbridled support to Israeli leaders, potential war criminals, enabling them with money, arms, etc. to continue to commit war crimes, etc., against the Palestinian people, I will add President Biden and other US government leaders to the complaint.
Dr. Frank Romano, PhD Sorbonne University
Member of the California & French Bars
Retired Law Professor: University of Paris

Paris, France, January 21st, 2020- Frank Romano, PhD, had disobeyed a court order to leave Israel and Palestine on September 25, 2018. He stayed in Palestine, undercover, for several months before he was captured by Israeli police, sent back to prison and eventually deported to France.

On January 21st, 2020, he filed 66-page complaint against Israeli Prime Minister Benjamin Netanyahu and former Minister of Defense Avigdor Lieberman before the International Criminal Court (ICC), in Holland, for War Crimes and Crimes Against Humanity, etc. committed against Palestinians in the West Bank.

The charges in the complaint include, but are not limited to, the following violations of international law:

Dr. Romano has practiced local and international criminal and civil law in the US and France. He is also a retired tenured professor from the University of Paris, France.

Dr. Frank Romano, visited the SABRA and SHATILA Refugee camp in Beirut. This visit is important to show people what a monster the State of Israel has become. In fact, in view of how it treats Palestinians in the West Bank, Gaza and Israel, he believes it has currently become even more of a monster than before!

The camp was the scene of a massacre of 460 to 3,500 civilians, mostly Palestinians and Lebanese Shiites, by a militia, Phalange, a predominantly Christian Lebanese right-wing party in the Sabra neighborhood and the adjacent Shatila refugee camp. On 16 September to 18 September 1982, a widespread massacre was carried out by the militia under the eyes of their Israeli allies. The ISRAEL DEFENSE FORCES, (IDF) received reports of some of the Phalanges atrocities in Sabra and Shatila but FAILED TO STOP THEM.
In 1983, a UN concluded that ISRAEL, as the camp’s occupying power, BORE RESPONSIBILITY for the violence. The commission also concluded that the massacre was a form of GENOCIDE.
In 1983, the Israeli Kahan Commission, appointed to investigate the incident, found that Israeli military personnel, aware that a massacre was in progress, had failed to take serious steps to stop it. The commission deemed Israel indirectly responsible, and ARIEL SHARON, then Defense Minister, BORE PERSONAL RESPONSIBILITY “for ignoring the danger of bloodshed and revenge”, forcing him to resign.

Frank Romano has returned to the Middle East, this time to Beirut, Lebanon. He plans to work notably with Palestinians in the refugee camps there. He is also continuing to work on the ICC complaint against Netanyahu and plans to organize a meeting with the Palestinian lawyers working on the case with him either in Beirut, or another City. In the photos, he is visiting Al-JANA/ARCPA, an organization that works with communities that face marginalization in Lebanon, in particular Palestinians, in building on their strengths, and documenting and disseminating their empowering experiences and cultural contributions. 1st photo is with his friend Samir at Al-Jana. 2nd and 3rd photos Romano’s eating a chicken, kabab soup with corn, salad and other goodies, served by Al-Jana Center. Beirut, Lebanon, March 14th, 2019. 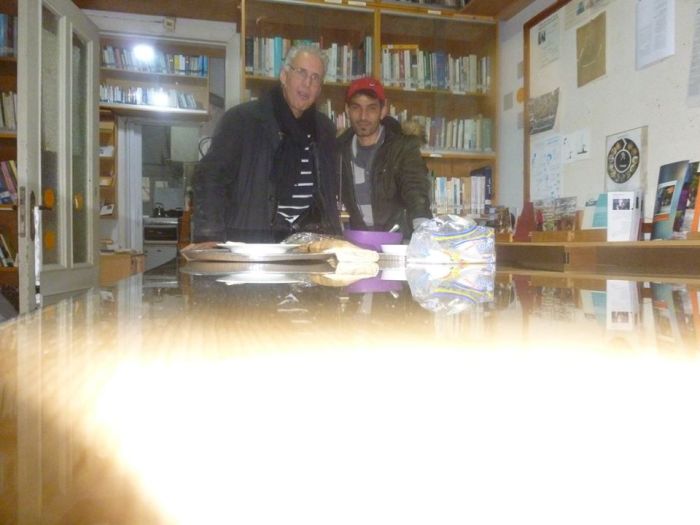 Frank Romano, visiting residents of Mar Elias Refugee camp in West Beirut. Drinking Turkish coffee, playing cards and trying to have a few laughs in the face of very difficult living conditions. In the picture, Romano is having fun with Palestinian refugees and a Syrian refuge. This is one of the highlights of his visit to Beirut!! Mar Elias Refugee Camp, Beirut, Lebanon, March 15, 2019. 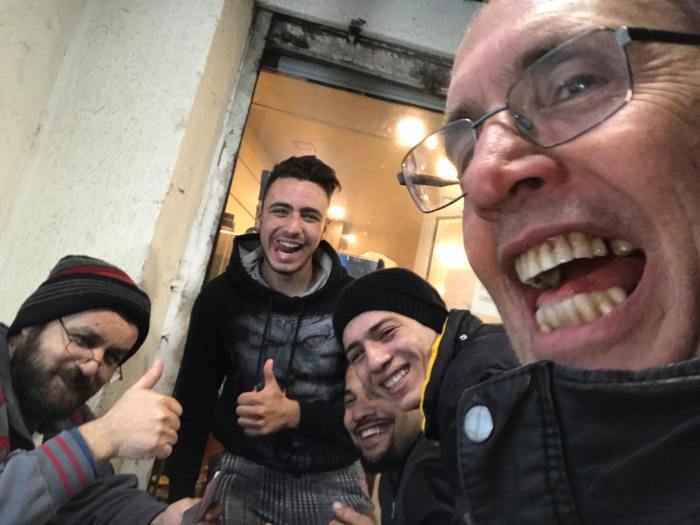 That is the title of the article Dr. Frank Romano invites the world to read, the type of FALSE PROPAGANDA flowing from a group of FANATIC ZIONIST JEWS about his recent capture by the Israeli police at “al Khan al Ahmar,” and his eventual deportation to France. It’s strange that for defending a Palestinian Bedouin village, al Khan al Ahmar, from total destruction by the Satanic Israeli government, that Frank Romano has also been labelled: antisemitic & extremist. Nothing could be any further from the truth!! Finally, it’s ironic that Western Media is still totally silent about his arrest, imprisonement and deportation on February 23-24, 2019. To read it, click on the link below:

Update:
Arrived in Paris about 5 am this morning, February 24th, 2019.
Freedom for Frank Romano 🇵🇸✌🏻

Frank Romano is professor of law with a US and French citizenship known for his support of the Palestinian cause and its rejection of Israeli occupation policies .
On Saturday mooring Frank Romano arrived at Khan al Ahmar for an interview with Olivier Pironet, journalist with “Le Monde Diplomatique” on Saturday morning, February 23rd. After a short interview, 3-4 Israeli police vehicles swarmed the area, arrested Romano, and then took him to the Maale Adumim police station and then to the immigration prison next to Ben Gurion airport for deportation. Apparently, the Israeli police had received an anonymous tip Romano was visiting Area C, at al Khan al Ahmar or the police had intercepted his or Mr. Pironet’s phone calls! Also, Pironet recently informed Romano that he just released from “a kind of police custody” that lasted almost 24 hours after Romano’s arrest.
Romano’s lawyer, Gaby Laski advised that he not contest it since he had no chance of prevailing (and would spend a week or so in prison for nothing) since he disobeyed a court order to leave Israel and Palestine on September 25th, 2018.
As such, he was deported to France and arrived in Paris about 5 am this morning, February 24th.
Romano went underground on September 26th and moved to Ramallah from al Khan al Ahmar to avoid arrest by Israeli police. Before this arrest, Romano had been working on an ICC complaint against Netanyahu and Lieberman for war crimes. He plans to continue working on the complaint from his Paris location. The photo below shows him together with Hisham Sharabati, Hebron Defense Committee coordinator in the Palestinian village of Khan Alahmar that the Israeli government threatening to evict, the other photo shows him in the airplane at Ben Gurion Airport, Tel Aviv, waiting for departure for France and the third was taken when he was arrested last Summer.

He is an author of several books, most notably the book of love and horror in the Middle East, recounting the details of his personal suffering with the Israeli occupation measures . 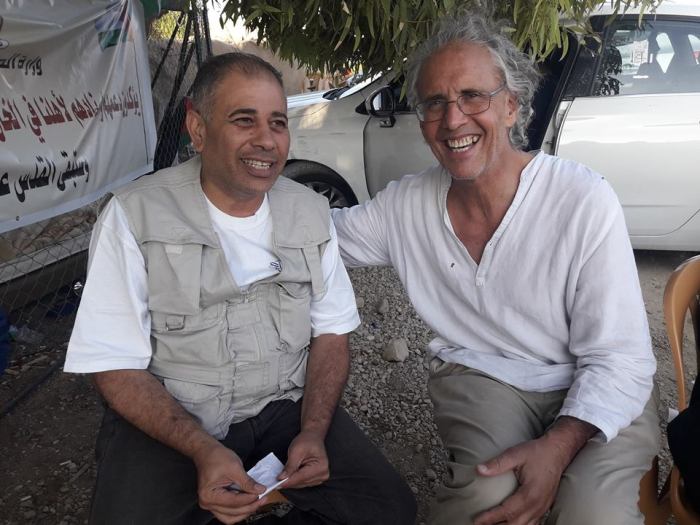 Frank Al Solidarity who was arrested during his response to the occupation of the occupation in the surroundings of the khan and hit the food for 3 days and refused to keep him away from the country, he told us his experience with laws, especially since he is a lawyer and lecturer in international law at the French University of French

Is a new freedom year

A rude awakening. The Israeli police arrived, escorting two hungry bulldozers. The bulldozers launched to clear the waterway and the rest of the sewage from Khan al Ahmar. The police are lined up above in cars, paddy wagons, etc. Since the police are searching for Frank Romano, who is now an illegal alien in Area C (where Khan al Ahmar is located, completely under Israeli jurisdiction), he had to leave the scene. Here he is trying to get a ride on the other side of the road from where the Israeli police are parked. The police were fortunately distracted by activists and the bulldozers below. Cat and mouse, anyone?  October 16th, 2018.Khan al Ahmar, Jericho Valley, Palestine, October 16th, 2018.

The Israeli army has arrived along with bulldozers (photo shows where bulldozers are now, but before sewage contamination) in Al Kahn al Ahmar, the Bedouin village. The area that was contaminated by settlement sewage has been flooded with water. I spoke with a couple of people at Khan al Ahmar. After discussing the situation with them, I’ve concluded that due to reports, with photos and videos, showing that Kfar Adumim sewage water hasn’t been removed and the entire area has not been sanitized (remains contaminated), that the Israeli army flooded the area with “clean?” water and is cleaning and clearing the area. Two bulldozers are working on it while the village is surrounded by Israeli soldiers. IS THE ISRAELI GOVERNMENT CLEANING THE AREA TO REMOVE EVIDENCE condemning it and settlers for gross negligence and more internation law violations?? What happens next is not clear?? Khan al Ahmar, Jericho Valley, Palestine, October 15th, 2018. 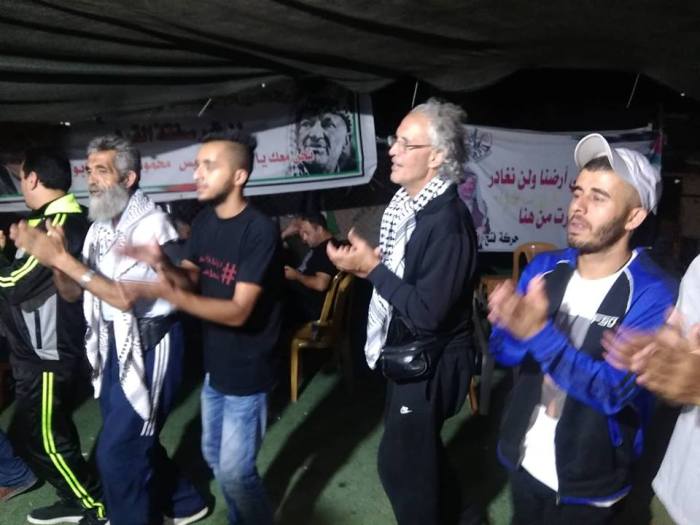 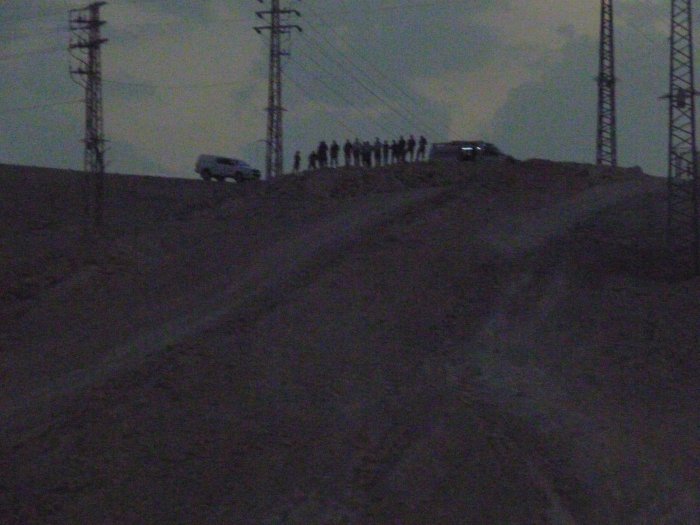 Frank Romano in Palestine. The partial destruction of Khan al Akmar, Jericho valley, Palestine began this morning at 5:30 am! 1st photo: Soldiers surrounded us & the village and were on site below to protect workers destroying the 4-5 houses below. Photo2: Romano standing with Bedouins, other Palestinians and activists watching the sad destruction of the houses. Khan al Akmar, Jericho Valley, West Bank, Sept. 13, 2018. 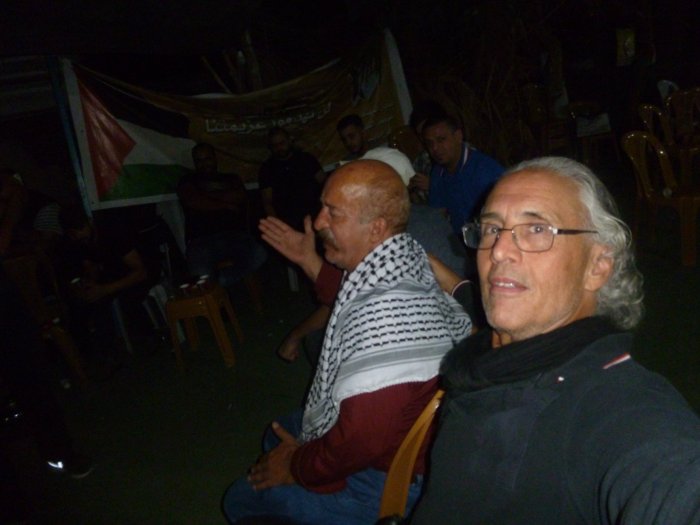